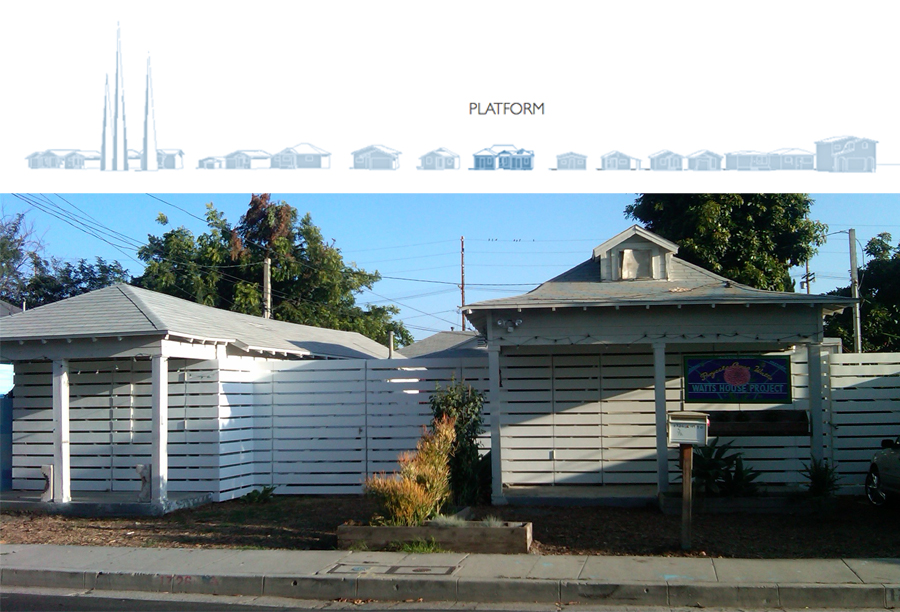 The Platform serves as the hub for the organization and has been integral to the facilitation of community-based initiatives, such as the 107th Street Neighborhood Association. Composed of a central green space and three freestanding shotgun houses, The Platform is a multi-use space, which, in addition to hosting community-run events, will also host an office, exhibition space, and artist-in-residency program. Currently, WHP partnered with the School of Architecture at USC who just completed a major façade improvement on two of the houses and will break ground in Spring 2012 on a full renovation of the facility.

ArtPlace is an initiative of 11 of America’s top foundations working in conjunction with the National Endowment for the Arts and seven federal agencies. Its aim is to drive revitalization across the country by putting the arts at the center of economic development and community revitalization. The approach being taken by ArtPlace, known as “creative placemaking,” has emerged over the past twenty years as a promising way to increase the vitality of communities and help them grow. WHP is thrilled about the partnership with ArtPlace, and excited about their funding of WHP’s headquarters. Situated in the heart of Watts, our new headquarters will spearhead construction projects and programs that will be a hub and catalyst for a vibrant Watts community.
About The Design Team

JOHN UMBANHOWER
AIA, LEED AP is the Los Angeles based principal of Hughes Umbanhowar Architecture. His design process initiates in compelling ideas and his solutions are derived through cross-field investigations in materials, technology and the natural and social sciences. John has been integral in several historically significant Los Angeles building projects during his career including renovation of the Troxell House by Richard Neutra and EastWest Recording Studios in collaboration with Philippe Starck. He has been the recipient of multiple AIA and furniture design awards. John speaks frequently on architecture and design in Los Angeles. He serves on the governing board for Ocean Charter School and received his Master of Architecture degree from the Southern California Institute of Architecture/SCI-Arc. www.huum.com

VICTOR JONES
is a scholar, educator and practitioner who’s work lies at the intersection of architecture, art and community building. Concentrated in the United States, Western Europe and extending to Brazil. He has been published, speaks nationally, and has led a critical design practice for over ten years. The issues of art and community building have been a primary concern of his work – to better facilitate and engender relationships between architecture and urbanism. Developing architectural and technological approaches to ongoing social concerns for individuals and communities will be the most significant focus of his research and practice over the next decade. www.fievrejones.com

TINA VILLADOLID
was born in New York City and is an artist and art educator. Tina visited the Platform back in the fall of 2009 and wanted to make a hand painted sign that would speak to the artistic legacy of the Watts Towers neighborhood and WHP’s vision. She searched the grounds and found an old piece of slightly warped plywood, weathered by many seasons of the elements. She packed it in the back of her car and half a year later returned with a painting that marked the Platform as a site for neighborhood change.

“I chose the dahlia as the main image when I discovered that not only is it the national flower of Mexico, but that when Christopher Columbus brought the dahlia to Europe it became wildly popular in the Italian ornamental gardens of the renaissance. I thought it was a great link between Simon Rodia and the neighborhood he immigrated to. Also, the dahlia symbolizes dignity and splendor, which I thought was perfect.” Tina Villadolid, 2010.