Of all the projects in the near half dozen collaborative renovations sponsored by Watts House Project it was artist Raul Curiel’s mosaic bench and planter that was most inspirational to us at the beginning of the design process. For it seemed that the humble, colorful piece of street furniture – comfortably located within the Flower House’s intentionally indented property line and effortlessly rhyming with artist Carolyn Castaño’s floral mural on the house itself – had effortlessly realized WHP’s grander conceptual ambition of imaginative redevelopment and revitalization. In other words, the bench had not only fulfilled both a practical need and beautification purpose but was also a catalyst for an alternative diagram to that which conventionally prescribes relationships between private and public domains and lives. This struck us as a potent way to think about our particular task, which was to design a new fence a few doors down the block. 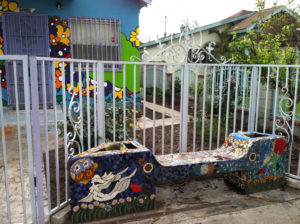 The force behind Curiel’s achievement was the house owner’s (Rosa Gutierrez) sense of generosity, which had compelled her to gift some of her (very little and precious) private front yard territory in order to create a small pocket of space in which to locate the bench. Curiel’s intimately scaled monument to immigrant contributions to Los Angeles was the crowning flourish of Rosa’s kindhearted gesture as its ornate surface and playful figure animated the property edge and enlivened the street. Happily, years of enjoyable conversations with visitors to Simon Rodia’s iconic Watts Towers had finally culminated in the creation of a special seat and place that distinguished and signified Rosa’s property while simultaneously establishing an intermediate space in which her private and our public worlds could overlap and inter-mingle.

The fence that wasn’t
Honestly, and without any snootiness whatsoever, fence design does not normally rank high on the list of design challenges for professional architects. But we’re not professionals. In fact we’re dedicated amateurs, good sports, and (almost always to our professional detriment) quite happy to spend as much time thinking about a fence as, say, a really big building. That is providing we think the fence has something to tell us about Architecture in a larger, loftier sense; and in this specific case providing that this particular fence has something to tell us about universal, instrumental ideas that frame relationships between variously scaled metropolitan components like buildings, streets, districts and broader organizational structures. Usually we set about this endeavor by adopting a contrarian stance, preferring to work through what something is not, or is not supposed to be, in order to make that something be anew.

In this particular case we were served up a contrarian challenge of our own when the clients, Evelia Carrillo and Jose Villegas, expressed (their only real ‘must have’) an interest in using brick as the fence material. Now this is not a material one usually associates with fences or fence-ness. What seemed like a counter-intuitive choice of material suggested to us that what Evelia and Jose really wanted was a not-fence – perhaps in simplistic terms what they really wanted was a wall. Strangely enough this seemed entirely appropriate given its location: right across the street from the die-hard amateur sculptor Simon Rodia’s enigmatic towers, tourettes and bric-a-bracs.

Seventeenseventysix, Or how we got Serpentine

Another disclosure (sorry Evelia and Jose, but it turned out/will turn out OK): when the clients mentioned brick we quietly recoiled. For a little while we were fixated on ideas of lightness and mobility, hoping that they would propel qualities and character development that would get us to a design strategy reflecting the participatory ethos of Raul Curiel’s bench’n’pocket of public/private space. We hadn’t imagined the fence as a heavy thing – that seemed so, well, wrong. But clearly Evelia’s and Jose’s deep desire for security was bound up in a need for a definitive, static and substantial boundary and constitution, or, as we remarked earlier more a wall than a fence.

And then we noticed the house number and something clicked. Soon after that we got on board with brick as a reasonable material choice for the not-fence. For it was the brass numbers 1776 on the porch post that hit us immediately at two levels: ironically the house and the neighborhood starkly remind us of the chasm between the ideals of the declaration of independence and the heartbreaking realities of inner city blight and poverty; and tectonically we were reminded that Thomas Jefferson, drafter of the declaration of independence and the grand architect and urban designer of the Republic itself, had done a clever thing or two with brick walls himself. We were particularly reminded of his Serpentine brick walls at the University of Virginia, where the seemingly willful ribbon-like garden wall was in fact underpinned by wily frugality and straightforward functionalism. 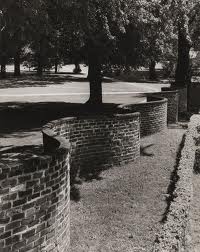 Bringing this all back to Evelia’s and Jose’s house at 1776 E. 107th Street in south central Los Angeles we decided on two mutually dependent platforms for our design dialog:

1) Although it is often confused for it, design is not civil or social engineering but it can engineer civility and sociability. In this case the good fence-good neighbor maxim would have to be expanded and elaborated and the process and outcome would have to be assessed against that ambition.

2) Like Jefferson’s Serpentine walls, the physique of the garden wall would have to perform with great versatility. Moreover having evolved from a fence to a wall it would have to maintain its transformative character as neither fence nor wall and vice versa. So we’re interested in a Jeffersonian snake-like wall but we think that in the Realpolitik couplet of tight budget and unskilled labor it’s best conceived of as a slinky serpent with an orthogonal posture.

BTW: Unlike some professional architects interested in freedom as a design agenda we’re not superstitious. We know that you can’t put too much symbolic stock in numbers so we promise that there will be less or more bricks than 1776 in the final outcome but NOT 1776 exactly.

But what a coincidence, right?

Seventeenseventysix 🙂
;&nbsp
….. say it quickly and you hiss.

Now luckily for us as much as Evelia and Jose are set on building a sense of security they’re also interested in friendly dialog and exchange. Like their neighbor Rosa up the street they spend significant time each week talking to Watts Towers visitors and similarly see the property line as a zone around which such dialog can be framed and promoted.

At our first meeting with Andrew Watkins and Miguel Rivera of SWA Group, the landscape architects on the project, all agreed that like Rosa’s house maybe the not-fence could become a bench? We also agreed that it could be interesting to raise the garden to the porch level in order to both create an exaggerated sense of scale and a more pronounced difference between private and public surfaces around which the project would materialize and mediate.

Our second meeting with Evelia and Jose was one of those rare client meetings where everyone was on the same page and we got the green light to go ahead with the exploration.

Since then we’ve been developing a design for a five foot high staggered, porous, screen-like brick bench-cum-wall and an 18” high deck floating over the existing driveway behind it. We’re exploring initial patterns of brick on vertical and horizontal (driveway) surfaces and considering the scale, rhythm and varying thickness of the assemblage. With SWA Group we’ll be working on landscape integration strategies and devising a scheme for lighting as well.

In our next blog entry – after we meet the clients, the WHP Director Trinidad Ruiz and Andrew and Miguel of SWA Group this weekend – we’ll touch on the following topics and many more:

Unum and Pluribus and healthy co-dependence.

Little Brick Throne on the Sidewalk.

Wall(s) in the shadows of line(s).